Welcome to Chloe-Moretz.org, a fansite dedicated to actress Chloë Moretz. You might recognize Chloë from movies like Hugo, Dark Shadows, Movie 43, Kick-Ass, Carrie and many others. Make sure to check back often for the latest news & media related to Chloë and her career. Feel free to contact me with any questions or if you would like to submit content.

On Instagram, Chloe posted on her story some brilliant info & tips on self-care by sharing some of the pages from Living With Joy: Keys to Personal Power and Spiritual Transformation. She captioned the photos suggesting that everyone take 15 minutes out of their day by saying

Everyone should take 15 minutes and try this out today

She specifically shared pages from the chapter called “Changing the Negative Into the Positive” which provides advice on fully focusing on happy thoughts and things by looking at something or someone you are critical/judgmental of, reflect inwardly on whether you’ve ever done the same thing you’re criticizing someone/the something else for, then try and look at it from that persons’ perspective, and have a newly found positive outlook on that opinion. 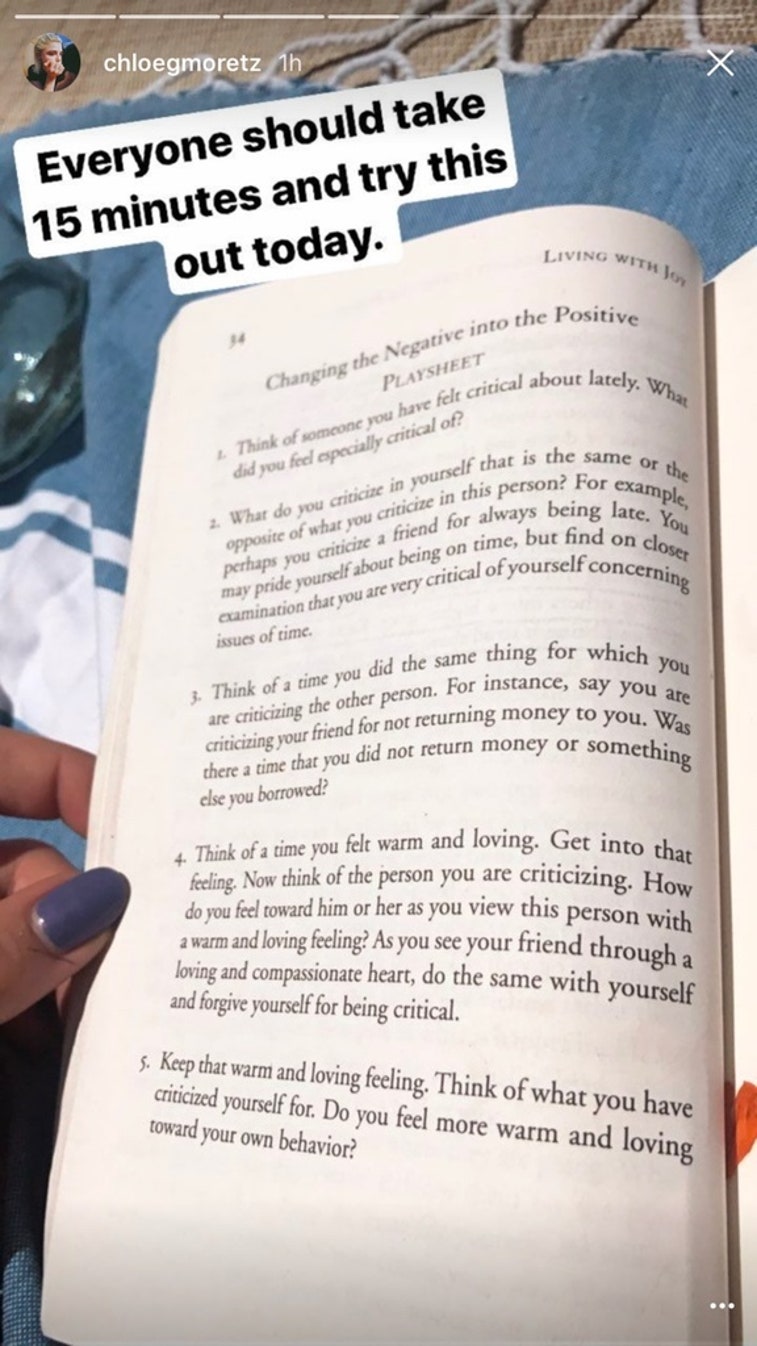 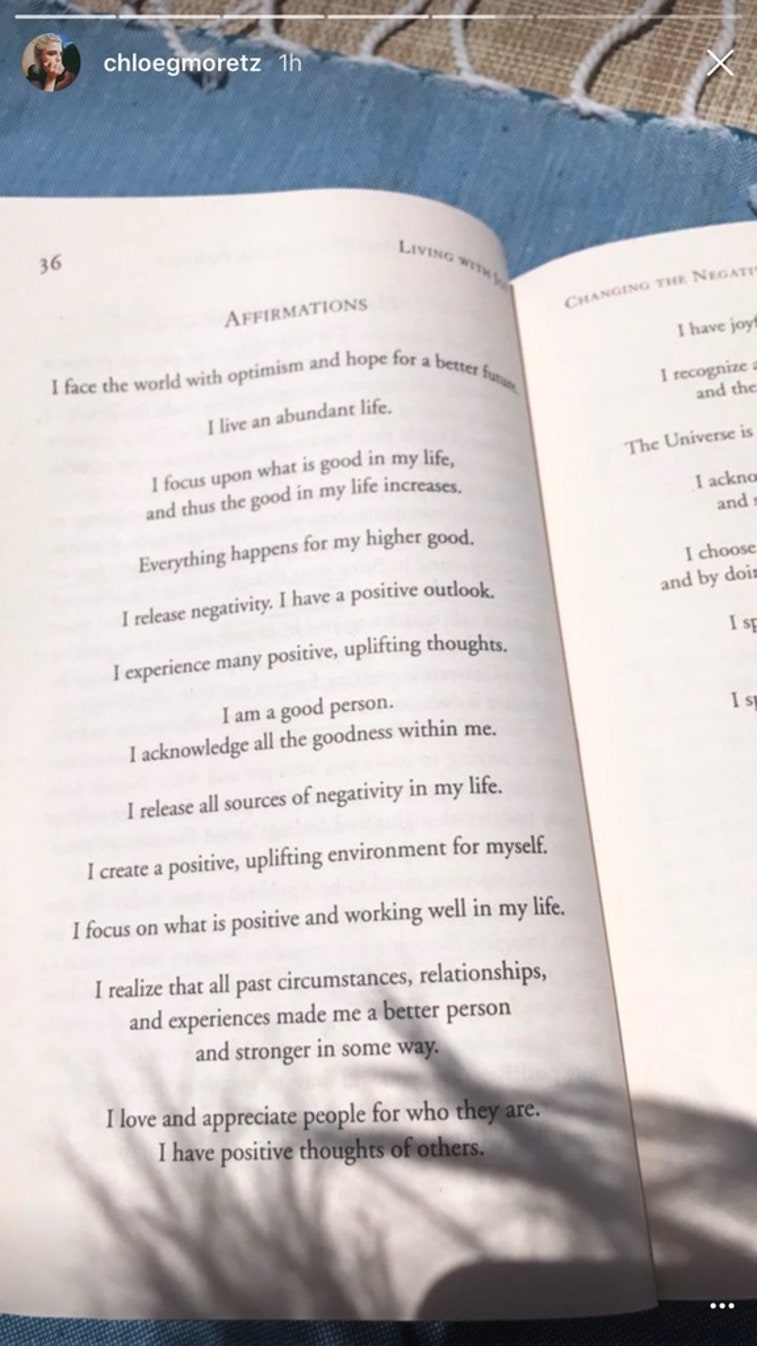 No comments
Published on In
Articles Media/Press News & Updates Photos

Has Chloe Got a New Tattoo?

Chloe is no stranger to tattoo’s as she already has around 5. So, could this be her sixth?

A photo by Chloe’s go-to tattooist, “Jonboy” was uploaded & posted to his Instagram account @jonboytattoo just under a day ago.

To stack up more evidence to prove that this is in fact Chloe, the photo was also uploaded to a few Chloe fan media sites which leaves us to believe that it is Chloe.

The tattoo appears to be a small, subtle outline of a classic movie camera behind her right ear, which could most definitely symbolize her amazing movie career, as well as her love & passion for acting.

No comments
Published on In
Articles

Actress Chloe Moretz says she can play around with her character by experimenting with different scents.

“What I think is beautiful about the Coach fragrance is that is really… I started realising fragrance is another way to express another part of who am I and play around with myself,” Moretz told people.com.
“It’s the same with fashion and with beauty. You can play around with the masks and veils you wear and figure out pieces and parts of you through that,” she added.

The ‘The 5th wave’ actress shared that she always feels nostalgic when she gets a hint of her grandmother’s fragrance.

“My first fragrance that I was around was my grandmother’s, and I remember being a baby, and now every time I smell it as an adult, it brings up so much scent memory, it was beautiful,” she said.

No comments
Published on In
Articles The 5th Wave

‘The 5th Wave’ Is A Below Average Young Adult Adventure

“The 5th Wave” comes to us not long after the conclusion of “The Hungers Games,” and it is the latest in a seemingly endless line of young adult book to film adaptations. As a result, I came into this movie feeling worn out even before it started. While the novel it is based on, written by Rick Yancey, might be an interesting read, what unfolds onscreen feels like the same old thing. Only the names and places have been changed to protect the filmmakers from potential lawsuits.

Chloe Grace Moretz stars as Cassie Sullivan, a young teenager (is there any other kind?) who lives a normal life with her family, attends high school where she’s a cheerleader and constantly deals with unrequited love like any other child held prisoner by adolescence. But suddenly an alien ship (looking like something out of “District 9”) appears in the sky and the Earth goes through four waves which leave it decimated and on the verge of extinction. All that Cassie has left is her brother who she ends up getting separated from, and from there she is determined to save him from a fate many others have suffered.

This movie does not get off to a good start as the visual effects used to convey the various waves are clearly CGI, and some scenes end up looking like outtakes from “Independence Day” or any other Roland Emmerich production. When the plot finally gains momentum, Cassie finds herself on the run and forced to defend herself in ways she never planned. She’s also looking for her brother whom she is very close to. Doesn’t this sound like something we just saw?

It’s a shame because the movie does have Moretz who makes this mess more bearable than it should be. Her breakthrough performance in “Kick Ass” was no fluke and she continues to do strong work in each film she appears in, regardless of whether it’s good or bad. She makes Cassie a strong heroine and one kids around the same age will easily relate to as she fends for herself in the dangerous world everyone has been thrust into, and Moretz makes you root for her throughout. But even she can’t save this routine young adult movie which in many ways has come out way too late.

Actually, what’s especially interesting about “The 5th Wave” is how the female characters are far more interesting than the male ones. It also helps that they have such terrific actresses inhabiting those characters, and each of them clearly relishes the opportunity to bring them to life. Maria Bello, sporting a very funky hairdo, makes Sergeant Reznik a slyly manipulative soldier as she forces the children to see the alien threat her way to where getting them to fight for the humans is easy as cake. Maika Monroe, so good in “The Guest” and “It Follows,” makes her character of Ringer a wonderfully tough warrior, and she also skillfully unveils the other layers of Ringer to show us a person who is deeply broken. Along with Moretz, they keep “The 5th Wave” from becoming a bore.

Read more at the source.

I Love You, Daddy

When a successful television writer’s daughter becomes the interest of an aging filmmaker with an appalling past, he becomes worried about how to handle the situation.

Princes who have been turned into Dwarfs seek the red shoes of a lady in order to break the spell, although it will not be easy. A parody with a twist.

A teenager takes on his own investigation of a murder in Washington D.C.

A young girl is forced into a gay conversion therapy center.

A young American ballerina comes to train at a prestigious German dance academy and uncovers the school’s dark and menacing secrets.


|
This is an unofficial non-profit fansite dedicated to Chloe Moretz. This site has no official affiliation with Chloe or her agents - it is run by fans for fans. The webmaster(s) of this website claim no ownership to any material seen on this website and is used, to the best of their knowledge, under the "Fair Use" copyright laws.